This won’t exactly be a full-fledged Photoshop tutorial; I just wanted to show a photo I edited in Photoshop and compare it to the original photo I had taken, and describe the general processes and tools that I used in Photoshop to get the various effects. However, to understand this tutorial you need at least basic background in Photoshop. If you have just installed Photoshop and want to try out what it can do, this probably is not the tutorial for you, because it will use some terms that I will casually throw around and not explain in detail. I have also not taken screenshots while I made this edit, so this won’t be a full walkthrough, and I shall only describe the procedures in words.

Anyway, even though I am an amateur at both photography and editing, I hope this example will still serve to show the powers of digital editing and software in particular like Photoshop in bringing out detail, vibrance and richness in photos.

So here are the two images: 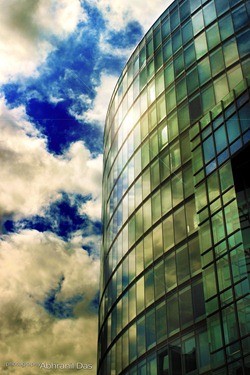 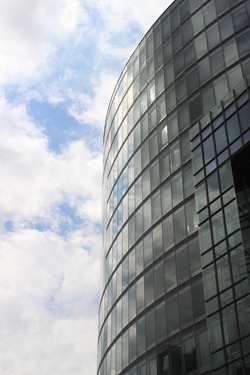 On the right is the original photo, of a building in Brussels, Belgium. On the left is the result after some hours of Photoshop by an amateur shopper such as me. You can click the images to see larger versions.

The major differences in the two photos are:

The question now is, how were these results achieved?

I said at the outset that this is not a full-fledged tutorial, because a step-by-step instruction will be too arduous for me to write and probably pretty fruitless to blindly follow. A lot of editing comes from hunches, intuition and experimentation (which grows the intuition), so I would not encourage anyone to do exactly what I did. However, I could outline the general procedures I used.

Make layer copies of your image and change its Image > Adjustment > Levels. You will notice that tweaking the levels makes detail and texture emerge at different exposure levels. Meaning that a certain tweak of the sliders will make detail emerge from the overexposed parts such as the clouds, at the cost of completely ruining and blackening the underexposed parts, while others will brighten and add visibility to the underexposed parts at the cost of whitewashing the overexposed parts. The trick is not to go with any one of these settings, but to employ them on different regions in separate layer copies, then merge them using layer masks. Keep checking continuously your result with the original photo to see which areas could be given more detail. Once you spot such a region, make a layer, adjust levels until that part has detail, then use layer masks to remove all but that part (use as soft a brush as possible, because the final output must appear a seamless, single image). Yes, Photoshop is a long, arduous, and highly manual process. One or two button press effects will give you pretty cheap shot results like Picasa and Instagram, but doing that kind of thing in Photoshop will not usually work.

Anyway, other adjustments you could try alongside levels is exposure, shadows/highlights etc. Basically, I would encourage you to fiddle around with all the options under Image > Adjustments for a few days to get an idea of what tool is capable of what effect.

For these the primary tools are Image > Adjustments > Photo Filter, Color Balance, Hue/Saturation and Vibrance. Photoshop earlier didn’t have the Vibrance tool, and using the Hue/Saturation tool to change saturation used to leave ugly bright grains in the image that was very unprofessional. Vibrance now does the job more subtly and in a slightly different way, so you can use Hue/Sat only to change the hue if required, not the saturation, but keep in mind that this is a crude tool which used beyond a measured degree will introduce patches of coloured grains in your photo. What I think vibrance concentrates on is increasing the colour diversity of the image rather than linearly increasing the saturation of every colour in the image. So if you have a bit of blue in a lot of green, vibrance will enhance that blue a lot more. When you are using the vibrance tool, use it in conjunction with the saturation slider (usually in opposite directions) to get your desired effect.

Use these colour enhancement tools with great caution, though. There’s a thin line between rich and colourful and a saturated comic disaster.

Again, use the same trick here that I mentioned for adding detail, that of separating into different regions via layer masks and applying vibrance to each region as it suits the region the most.

For warmth, when I need it, I usually use the third warm filter in the Photo Filter dropdown list. I use it on clouds, but also generally on the whole image on most occasions because most of the times a bit of warmth makes the image more attractive. Again, this depends on your image. If you have a photo of a beach with white sand and cool blue water, you probably want to preserve the blues. Tweaking the colour temperature has its effect on all colours of your image, and it effectively decreases your colour diversity. (Think of it as putting a filter of a certain colour on top of your image. Every colour then acquires a tint or shade of that colour and the diversity between them is reduced.) Many photos acquire their ‘wow’ factor from contrast and diversity in colour, so make sure you are not ruining that rare component in your image for the sake of a warm and fuzzy feeling.

I usually use photo filters on separate regions of my image and not on the whole thing (for example, mostly on the clouds here) so as not to lose this diversity. I make layer copies as I said, apply photo filters, then merge with layer masks. However, if different regions of your photo have very different colour temperatures, it might look decidedly unrealistic and just plain wrong. Human beings are very good at figuring out what effect a certain type of lighting in the sky should have on objects in the image, and even a slight deviation will make the photo fall apart. It is important, therefore, to do this differential colour temperature tweak cautiously and with due measure, and know always where to draw the line. The merging of regions with different colour temperatures should be smooth and seamless, like the clouds and the sky in this photo. The photo filter adjustment that gives the clouds that warm glow completely botches the appearance of the sky (expected, since it’s all cool blue), so I had to keep those separate and merge with layer masks using a soft brush.

Remember: a slight departure from reality usually looks good, but only up to the point where you cannot put your finger on what exactly is unreal. When your effects are so loud that the editing you have done becomes obvious, you have failed.

If you notice closely, you may realize that parts of the image have acquired a glowing look that contributes significantly to the final semi-realistic, sci-fi sort of perception I was heading for. For this you copy your image into a new layer on top, set its blend mode to overlay or soft light or something like that (fiddle around with this), then apply a Filter > Blur > Gaussian Blur to it (you can also use other blurs; I just find it fast and good enough for my purpose).

You can find a detailed walkthrough (with screenshots) of using overlay layers and layer masks in this other tutorial that I wrote.

This process blurs out some detail though, so as before, you may employ this differently for different sections, and using layer masks you can get a final output. Note though, that layers in most of these overlay-type blend modes when stacked on top of each other with overlapping regions, will increase the effect greatly, and not usually to positive outcomes. So if you require separate blur overlays for different regions, you need to merge pairs of normal+overlay layers instead of many overlay layers atop a single normal one.

This was a cheap one: Filter > Render > Lens Flare. It is not as cheap and easy as it might appear though; there are many things to consider even here. There are only some logical regions in your image where there could be a bright spot creating a lens flare. Put it anywhere else, and again the human eye can catch the artifice immediately. I chose here the spot which even without the flare was the brightest part of the building facade.

The brightness of the flare is also important. The secondary rings are good to look at, but they come with the bright bloom at the center which washes out nearby areas and you lose detail. By default there is no way to control the appearance of the flare or its different parts, as it is rendered smack on top of your image and then there’s nothing you can do. But with some innovation, actually there is.

Make a new layer on top of your image and fill it with black, and set its blend mode to screen (experiment with the blend mode). Put your lens flare on this layer, and it will show up faithfully on your image. Now you can tweak the appearance of your lens flare (visibility, warmth, etc.) on the top layer and the changes will show in your bottom layer, the original image. This way you can keep your flare and image separate and editable. Make sure, again, to keep the colour temperature and colour balance of the lens flare concordant with the lighting of the image, or else it will look immediately weird to even a slightly trained eye.

Careful also about choosing the lens type for the flare. I chose a decidedly unrealistic one here (movie prime), because one of my goals as I set out editing this photo was to make it look as semi-realistic as possible. The reason for this is a little involved, and will hopefully be covered in a future post, where I discuss the popular resentment against Photoshopping and editing and general.