This story is about a knife.

I visited Switzerland pretty early during my summer stay in Germany in 2011. I have friends there with whom I stayed. When I was about to return by train, my friend Alex who had come to see me off  went into a tourist shop with me in the station as I bought a few little souvenirs. This is frankly the last type of place where you should buy things, because they are targeted towards tourists with money to spend on junk trinkets. But what the hell, I was pretty late and I wanted something. So I bought a few things (including a red T-shirt with a proud Swiss flag and ‘Suisse’ written across the chest, and which upon subsequent investigation revealed a tiny ‘Made in Bangladesh’ tag), and then my gaze fell on something that I just had to buy. Of course, it was a Swiss army knife. My birthday had been just a couple of days ago, so Alex became wonderful and said he’d pay for it as a gift. I was overjoyed.

On the way back, I started to completely drool over it and took a photo of it in the train. So here it is: 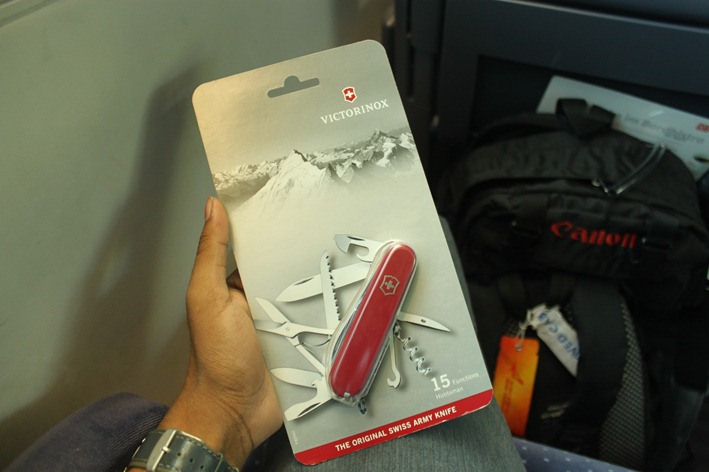 After I returned to Germany, though, and had taken a better look at it, I was a little unsure of exactly how sharp it was. I couldn’t immediately think of anything to try the blades on. If you own a Victorinox, that is of course not a feeling you want to have about it. You want to feel content.

Anyway, on my next trip a week later with a friend named Vishal, probably to Italy, I took the knife along.

Sitting across the aisle on the train was a wiry woman who I didn’t like the sight of very much. Yes, just because of the way she looked. She was thin, wiry, had sunken eyes and thinning hair, and looked on the whole pretty sinister to me.

So on the train I pulled out the knife, of course.

If you are imagining that this caused some panic or distress among the passengers, no, that’s not how this story goes.

I pulled out the knife to show it off to Vishal. He took it in his hand, and I started to say, pretty proudly, ‘Be careful. This is very sharp stuff, man. Don’t cut yourself.’

Vishal was very impressed with the whole thing, you know, how cool and outdoorsy it is to have a Swiss army knife with you. And I was radiating tangible awesomeness as I took it back from him.

A couple of blades were open, and I started to close them.

Do you know how this closing works? The blades resist your closing for some of the way, then at a critical angle it suddenly snaps close. As this happened with one of the blades, my finger pressing behind it followed along with the blade, and landed smack on the cutting edge of another blade that was open.

I watched as blood started to flow immediately from a beautiful, long cut.

I remember the next thing that happened: my lips bent involuntarily into a serene, pristine smile, watching the accumulating blood.

This shit is sharp, I thought.

Vishal was visibly distraught. I was, too, now, realizing how stupid this was looking. I needed to stop the bleeding and the dripping and all the red nonsense somehow. Red is too bright a colour in a train full of people like that.

I pulled out some tissues that had come with some McDonald’s stuff I had packed along, and started dabbing my finger on them. I could not dab the tissue on my finger because it was too much blood, so I just had to lay the tissue on the seat and dab my finger at different spots, letting gravity do its job.

It was a pretty long cut, and the blood just kept flowing. In a few minutes, the tissue had become this: 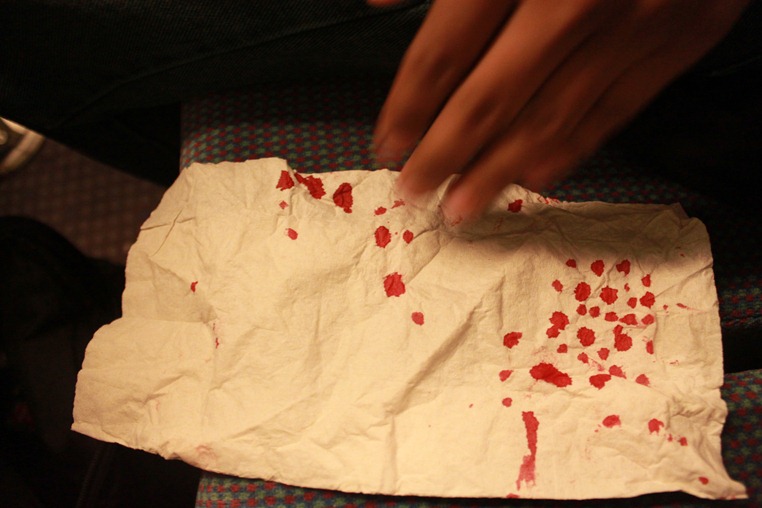 At this time, an Italian train attendant of some kind arrived in our compartment, to check the tickets or perhaps he was just going through, I can’t remember which.

I was worried now, and embarrassed to a far greater extent, and I asked this guy if I could have some first aid. People were looking at me now.

He looked blankly at my cut (it was just starting to look scary at this point), and shrugged and said there’s nothing he could do, and went on his way. Italians are rude, I thought. I had got too used to German politeness.

I was hating to touch the tissue by then; it was starting to remind me of a, well, you know what. But given the options, I decided that I’d have to resort to keep dabbing my finger on it until the bleeding stopped. This looked like first class idiocy now.

Suddenly, this wiry, sinister woman, who had observed the exchange with the attendant, called me across the aisle, and said that she had some band-aid with her.

She rummaged through her purse, pulled out a band-aid and gave it to me. I was immediately so sorry and grateful to her that I showered her with profuse thankfulness as I accepted it.

The other half of this story of the knife happened on my way back to India. This is a sad story about the loss of the knife actually. And there are three people who are responsible for it, to be revealed in chronological order.

When I had packed my bags for India, I had suddenly become too moronic to suspect that Swiss army knives would not be allowed in the cabin baggage. So it arrived in Hamburg airport happily nestled in my backpack, oblivious yet of its impending fate. I, therefore, was the first of the three persons responsible.

As I checked in to get my boarding pass, I met the second person responsible for the sad parting: the woman at the counter.

She was a thin, old-ish woman with pale hair. As I was putting my suitcase on the belt for the registered luggage, she told me that I’d have to get rid of all the previous airplane tags. She tried tearing them by hand, but it wouldn’t tear. I tried it, and I couldn’t tear any either. Then I remembered the knife. I told her, just one moment, and with one elegant flourish, I brought out the knife from my bag and snapped open the scissors in it, and got to cutting the tags away.

A sensible counter person would at the sight of this have gone into a wild-eyed tantrum, shrieking like a love-crazed yeti at me to put the knife away in the registered luggage.

You know what she did? She went completely gaga over my effusing superhuman coolness and watched me and my unbearably awesome army knife go at the baggage tags like some starry-eyed, giggly high school crush.

And this is why she was the second responsible person. If I were sorting these people instead in terms of their contribution to the misfortune, she would lead hands down.

I checked in my registered luggage, popped the knife back into my backpack and got on the flight. Nobody stopped me even at the cabin baggage check.

Oh wait, actually they did. It was because I had some liquid with me. I think it was a face wash gel which I had to throw away. Then they said I have more liquid. It was a bottle of water, and they said to throw it too, but I had memories associated with the bottle (that’s me), so I asked them if I could just drain the water, which they allowed. So I actually left all my stuff at that checking, strolled out of the airport, found a trash, drained the water and came back. But I remembered this little part mostly positively, because the girl who was requesting me to get rid of all these was very sweet and apologetic and she seriously asked me if I had been in the US for long (I had a serious American accent on throughout my Europe stay).

Anyway, back to the story.

My flight wasn’t a straight one to India. It was a cheap (the cheapest I could find) Aeroflot flight that connected through Sheremetyevo, Moscow. Suffice it to say that

a. There was another check of the cabin baggage there, and

b. Russians are more careful.

So I’m wearing my shoes after the security pat-down when this beefy, stern looking security woman watching the scans of the bags tells me that I have a knife, and I must take it out. She is, of course, the third person.

For a moment I don’t know what she is talking about, then I remember. And I think, aghast, no, not like this.
I gingerly bring out my Swiss army knife. She unceremoniously puts it to her side and tells me to move on.

You know what happens when an Indian suddenly faces the inexorable hand of fate like this? (There’s a pun here with face and hand. It’s called a slap. It’s what fate usually does to you.)

We reset to our default Indian bargaining mode.

I ask her if it is not allowed. She says it is not. Then I ask her with please. She said there is no way that knife is allowed in the cabin.

I think of a last-ditch try, although in my head it sounded really lame. This is your last chance anyway, I told myself. Then I looked up at her and blurted out: ‘But it was a birthday gift! From a friend!’

She did not even look up as she repeated the same thing. I think she was starting to think now that maybe I had some serious terrorist ideas.

I walked slowly away from the checking, gazing longingly at my Swiss army knife, knowing it was the last I would ever see of it.

My friends from Switzerland visited us later the following year in India, and I had told them of the unfortunate story and told Alex to bring another Swiss army knife, a better one, for which I would pay. He brought it, and I have it now, and it’s awesome and sharp and cutting-edge technology. I don’t test it on myself any more though.

8 thoughts on “Anecdotes of Europe #3: Story of a Knife”