Hi. I’ve been going around with a camera my sister recently bought
and taking some useless photos. Actually, when you come to think of it, among
the photos on that thing, only the ones I’ve shot can be called useful, because
all the others are my sister’s shots of herself. Really. She has in total shot
about 10 photos of things that are not herself, and the rest of the shots
are all of things that are not not herself. I just unplugged the camera,
so I can’t tell you exactly how many of those self-portraits there were, but I
guess there were about 35 or so, in about 4 different sittings. And I had
to shoot one of those sessions, so she could send photos of herself to her
boyfriend. What a waste of time. Anyway, I can proudly declare that at least
mine were better as photographs. I’ll confess that there’s one photo of
me in there, by myself. No more. I’m not that narcissistic.
Speaking of my photos, here are a few I wanted to put up on my blog. Also, these
have been uploaded not onto photobucket, but onto Windows Live SkyDrive, so that
I can simultaneously check out what it’s about.

This one is a dragonfly on one of my mother’s plants on the roof.
I’m usually pretty scared of insects, but as I took one shot after another, all
the time looking at the LCD screen, inching closer and closer with each shot, I
guess I went to a proximity I wouldn’t have thought of trying if I wasn’t
shooting. Anyway, I think this one came out fine:

I want
you to guess what this next one is. It was mostly unintended, but except for
the grains, I think this one has turned out to have a nice effect. It looks good
to me, at least. 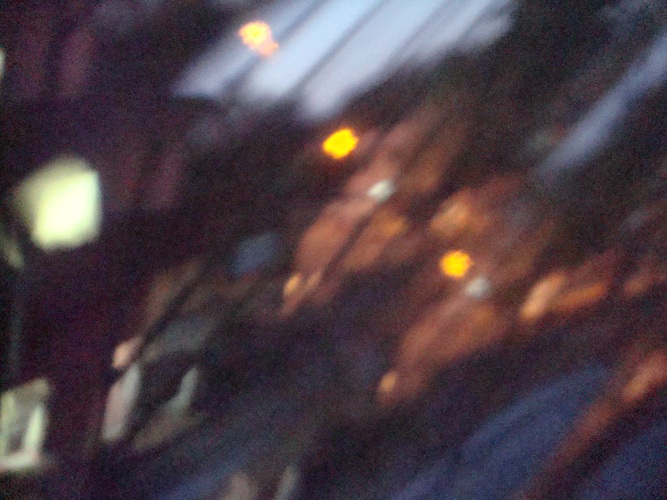 That was
actually the lights of the street through the window panes of my sister’s room.

No
awards for guessing what this is:

I kept a
watch for clouds several days after I shot this one, but the Kolkata sky seemed
to have got wind (forgive the pun) of my intentions from somewhere and diverted all its clouds
somewhere else and we had only those stupid, blunt, colourless noontime skies
and sunsets.

I guess
this’ll be it for now. I’ve got bored, making so many mistakes with SkyDrive.
Anyway, I hope the links work and if you click them, the actual image, in all
its colossal splendour, will open up in front of you. These photos are by no
means great ones, and I’ll try to get better.

P.S. I
noticed a funny thing in SkyDrive. When you’ve hit the Upload button, they give
you a game to play while you wait for the file to upload. The game’s nothing but
a very shiny beach ball in a square frame, and you can bounce it around with
your mouse. That’s it.

Sometimes you see pretty weird things in beta versions. My guess is some guy at
Microsoft had his afternoon off.